Getting on the Bandwagon
by David MillsAmerican String Teacher
February 2009

While traveling through rural Maine, I stopped in a music store that provides instruments to 70 schools, and I asked how many schools have string programs. The answer was none. School band programs dominate the educational landscape–albeit they have a lot to offer students who participate. Unfortunately, too often band directors ask violin students to take up another instrument in order to join the band–be it a generic grade school band or a high school jazz band. Here is a quote from Rebecca Wexler, a student who ultimately founded the Harvard Klezmer Band: “When I requested permission to join the high school jazz band, the music department vetoed my request on the grounds that violins did not belong. I was shocked. An instrument should be a tool, not a determinant, of expression. After years of training on one instrument, why should I have to learn another?”

Granted there are a number of obstacles that make it difficult to incorporate violins into a school band. So, out of necessity has come the development of Flat Key Violins that allow everyone to get on the bandwagon.

What are Flat Key Violins? Flat Key Violins are amplified instruments tuned a whole step down from a traditional violin or a whole step down from a viola. For example, a Bb Violin is tuned FCGD (sometimes referred to as a “Cajun tuning”). On a Bb Violin you can sight read Bb parts (clarinet, trumpet etc.); for example, when you see a note in the top space of the staff, you play your top string open and out comes a D. The Eb Alto Violin is tuned BbFCG, and allows you to sight read Eb parts (alto saxophone). When you have a violinist playing an Eb Alto Violin in the sax section of a 17-piece jazz band, you can often see by the bow strokes when the arranger is intending the saxes to function like a string section. Flat Key Violins allow the violinist to take advantage of open strings when playing typical band arrangements. When improvising the violinist can contribute some fiddle physicality-a new dimension for all sorts of bands.

Since it takes eight violins to balance the volume of one clarinet, violins in a band need to be amplified. A small amplifier will bring a violin up to the volume of a saxophone. Amplifying violins is tricky. They can sound really abrasive if not equalized properly. Some electric violins will work plugged directly into a PA system, and some will not. (You can email the author if you want to be directed to several websites that offer technical advice.)

Another tricky issue is maintaining good intonation when you are playing in the midst of a loud horn section. We solved that problem by using a D’Addario Fingerboard Appliqué which was originally created as a tactile alternative to fingerboard tape used as an aid for beginning students. The Appliqué has imbedded nylon “frets” like those used on a viola da gamba. On a viola da gamba, unlike the guitar, when you release pressure you do not cut off the sound, so you can still achieve a smooth glissando by sliding with light pressure above the gamba frets. Joanna Becker, a fellow teacher and professional classical violinist with impeccable intonation, had this to say about playing a Flat Key Violin in alternative styles: “It took me a little while to get accustomed to placing my fingers slightly behind the ‘frets’, but after that, I find that I need less vibrato, and I am much more relaxed when improvising.”

What is the response from the music industry? David Lusterman, the editor of Strings magazine wrote an article: “Fostering a String-Music Revolution.” In this article he posed this question: “The band-instrument trade made school bands and instruction part of the national culture. Why can’t we do the same for strings?”

Generally speaking, leaders in the music industry are leery of investing time and money into products that support a concept that is untested. However, the promise of incorporating violin students into school bands is so alluring, several major companies have been lending support including D’Addario, Sam Ash Music and NS Design. When Jerry Ash, the octogenarian head of the Sam Ash Music chain, responded to the concept of Flat Key Violins he said: “I am skeptical because violin teachers tend to be extremely conservative. But then again, when a representative from Fender guitars came to me in 1951 with the first Fender bass, I said, ‘What bass player is going to play that thing?’ Who knew?”

How do I approach a band director about letting my student join the band? Generally speaking, grade school band directors are happy to add more students to the band. (See the Q&A sidebar to this article in which we questioned a couple of school band directors.) In middle school and high school you may get resistance that often comes from concern that adding strings to the band will cause problems that will require a lot of extra work. Below are some typical objections with responses designed to waylay the band director’s concern.

Objection No. 1: “I don’t have any music for violin, and there is such a wide schism between the flat keys favored by horns and sharp keys favored by strings.”
Your Response: The age-old practice of scordatura, alternate tunings to give open string advantage to string players, eliminates the need for any additional music.

Scordatura is found in Bach, Mozart, Stravinsky, Mahler, Stevie Ray Vaughn, and Jimi Hendrix not to mention a myriad of folk music traditions.

Objection No. 2: “The band is loud – how is anyone going to hear a violin?”
Your Response: The student only needs only a modicum of amplification.

Show the director the little amp or the preamp configuration your student will use. Beware of hypocrites who claim they are purists, yet they utilize electric pianos or microphones for soloists. Ironically, jazz band directors are amongst the most conservative. At Billy Strayhorn’s funeral, Duke Ellington asked trumpeter Ray Nance to play “Take the A Train” on the violin – purely from the heart.

Objection No. 3: “I have heard electric violins, and when the intonation is off, they are a painful sound.”
Your Response: The Bb and Eb Flat Key Violins are equipped with Fingerboard Appliqués that give a fret-like advantage similar to the viola da gamba. The violinists will play in better tune than most of the sax players.

Rest assured that once these band directors see how easy it is to expand the band, they will change their tune. An Eb Alto Violin in unison with a tenor sax has a silky smooth characteristic that one finds in no other instrument combination.

Will doubling on a Flat Key Violin detract from a student’s development as a “serious musician?” Getting on the bandwagon will only enhance your students’ ability to express their individuality on their instruments. Paganini was reputed to run off to the woods to play with the gypsies. He was such a phenomenal player, it was rumored that he had “diabolical assistance.” More than likely, jamming with the gypsies taught Paganini to play with such complete abandonment.

Doubling on a second instrument is a familiar practice in band land. For the sake of joining the marching band, a trumpeter will take up the Baritone Horn. To join the jazz band, a bassoonist will take up the saxophone. Should their teachers worry about the development of their embouchure? No, the more often one switches from one instrument to another, the easier it becomes. Some violinists with perfect pitch find it easier to double on the Eb Alto Violin because it is a completely different range from the violin.

If you have a student competing for admission to a conservatory, there may be a time issue requiring hours of daily practice that cannot be sacrificed to any social activity. Beyond that, playing fun music is not going to handicap your student.

Social Implications Even if you are a teacher who is only interested in the symphonic orchestra, you might want to keep this in mind: American orchestras, most of which are publicly funded, have pitiful minority representation. African-American and Hispanic households are not likely to support violin instruction if they feel the instrument is confined to European classical music. If, however, they see the violin works in any and all styles of music, they will encourage their youngsters to take up the violin. As most of us know, to be proficient on the violin, one must start at a young age. Today it is not uncommon to find a classical bass player who began on the bass guitar only to develop a love for classical music when he or she took up the double bass as a teenager.

Another social implication is the inclusion of women in jazz programs, rock ensembles, or even joining garage bands of youngsters interested in creating “their own sound.” In all my years of teaching improvisation, I have had just a couple of female guitar students. Conversely, 75% of my violin improvisation students are teenage girls.

Music teachers are in many ways analogous to sports coaches. Few of us will have a student who becomes a full-time professional, and we should not structure our programs on the slim chance that one student needs pre-professional training. We are there to teach discipline and dedication – to develop coordination – to foster interpersonal skills – and ultimately, to offer the joie de vivre that each of us has found for ourselves in music or sports. The kids on the bandwagon are having a lot of fun. Tell them to scoot over and make room for the kid with the violin. 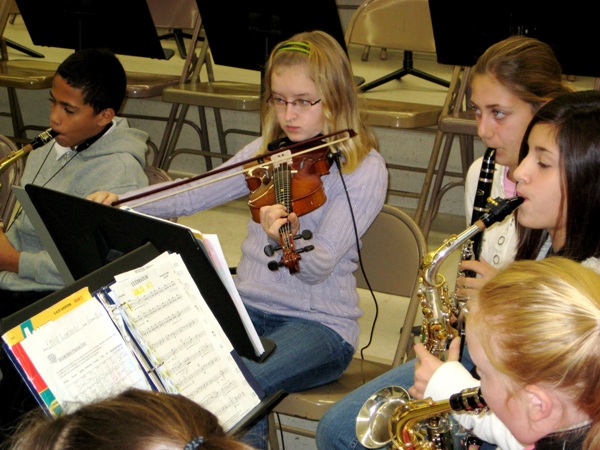 Sarah amongst the saxophones 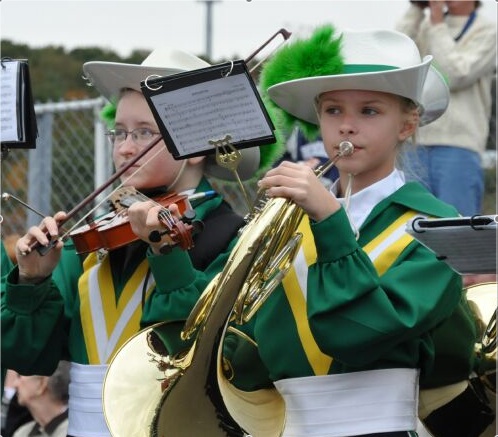 Sarah in the marching band

Getting on the Bandwagon – Q&A Sidebar
We asked a couple of band directors about accepting violinists into their school bands.

Q: What was your initial reaction when a student asked to play an Eb Violin in the band?

Q: Because the student can sight-read Eb alto sax parts, did you have to make any accommodations with the music?

Q: What was the reaction of the other students?

Q: How well did the violin fit in with the sound of the saxes?

Q: Did the “fretted” violin help the intonation of the section?

Q: Can you comment on what it means socially for the student to be a member of the band?

Q: If another violin student asks to join the band, will you accept another?